What's going in our club?

Once again, Joe Pinnelli has arranged for the next regular meeting of the CenTex Tin Lizzies to be an on-line virtual event, for those who wish to participate and have computer capabilities. To meet virtually, click on the link below at 6:45pm:

As of this writing, Minnie Lee is now back on the road. Seems that there was an issue of water seeping into the crankcase. Stay tuned for details.

Once again, Vic Donnell put the word out for another tech session to put the completed engine back in Minnie Lee. As with the previous work session, there were a number of fellow club members who showed up to help with the re-installation. The task is not a simple one when dealing with a nicely restored car but as the saying goes "Many hands make light work".

Although we did not get to the final stage of cranking the motor, Vic will be able to complete the task in short order. This has been a great opportunity for club members to learn what it takes to get a Model T back on the road as well a a time get to know our members a little better. Thank you Vic and Jan for hosting this session!

After a two year hiatus, we had 8 Model T's along with the family members in attendance at this years Fathers' Day car show.

As a follow-up on the Donnell's engine overhaul, another tech session was held to re-assemble the engine for "Minnie Lee", the 1913 touring car. It took several hours and a number of new parts, resulting in a completed engine.

Vic will probably have another tech session to help him install the completed engine. Stay tuned. 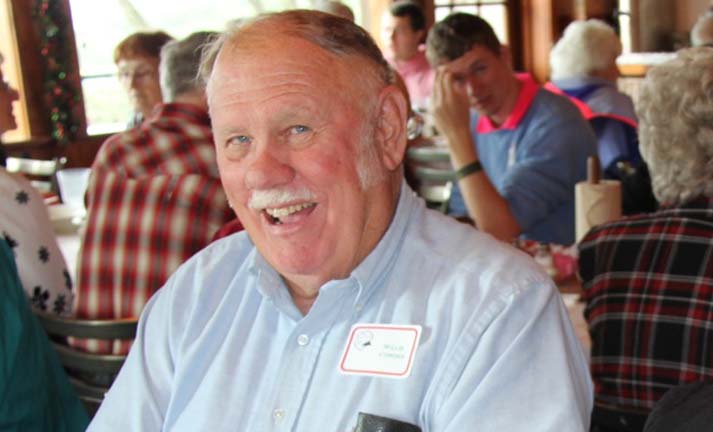 We have learned of some very sad news, that our friend and fellow old car lover, Willie Cordes passed away on May 8.

Vic Donnell put a call out for an unscheduled tech session this past weekend at his garage to assist in the removal of the engine from "Minnie Lee", the 1913 touring car. It seems that while attending the driving tour in Flatonia, Vic and Jan's Model T suffered a broken low speed transmission drum. Unfortunately, the only way to cure the problem is to pull the engine from the car and perform a transmission rebuild. Removing the engine from a Model T is a major undertaking, requiring disassembly of the engine compartment and unbolting the body from the chassis and lifting it high enough to allow the motor mounts to clear the car.

Vic will probably have another tech session to help him find all the pieces removed from the car! Stay tuned.

The Centex Tin Lizzies tour to Flatonia, hosted by Dennis and Kathryn Geesaman was a great success! It was an overnight tour to the OLLE Hotel, considered by many to be one of the most haunted inns in the Lone Star State! Evidence of the hauntings goes beyond isolated incidents. Tours around the Flatonia area included driving to several of the painted churches and other local sites of interest.

Check out the March Newsletter at the bottom of the page for details.

Pictures are courtesy of our own photograper, Joe Pinnelli

This Model T languished in an Austin auto body shop for almost 30 years before it was acquired by Randy and Jody Brown in May of 2018. Much of the body and paint work was already done and many new parts were included. Assembly included installation of a new radiator, new tires, new gas tank, replacement body wood, and new upholstrey. The car will be complete with the installation of the new top.

While changing the break in oil, there were some brass bits found in the drain plug, probably from the magneto assembly. In order to prevent a catastrophic engine failure, the motor will have to be removed from the car and disassembled. Stay tuned for further updates.

The 41st annual Texas Tea Party was held in Schulenburg, Texas. It was hosted by Space City T's, and by all reports was a well attended tour with lots of driving. For more details, click on the October 2018 Newsletter link at the bottom of the page.

The Centex Tin Lizzies had 10 cars participating this year. From all accounts, it was a fun one and there were more parade entrants than years past.

Photos are courtesy of John Anderson

This year's Christmas party was held on December 9th at Texas Land and Cattle Company. Thanks again to the efforts of our hosts, Jeff and Denise Treadwell!

November 11 was a beautiful fall day, perfect for the annual Kingsbury Fly-In. We were joined by the Lone Star Model A Club of Georgetown, led by our own Glenn Schiller to our lunch stop in Fintress. After a nice lunch, we headed via the winding back roads to the Kingsbury Aerodrome for an afternoon of admiring the many cars and airplanes that show up for this event. We had a total of 8 Model T's and 8 Model A's attendthe tour.

For further details, click on the link at the bottom of this page for the November Band Chatter.

Fellow club member, Ronny Reeves has proven that surviving Model T's are still out there! Check out the pictures to see for yourself. It appears to be a 1919-20 vintage Ford that started life as a Runabout (aka roadster). Over the years of use, it has been subjected to a number of modifications. The trunk has been removed and a combination toolbox rumble seat has been added. Ladder racks have been placed on the tops of the fenders on both sides. At some point in its life, the original engine was replaced with a factory replacement, manufactured in August, 1928. Front and rear bumpers, headlight eyebrows, Hassler shock absorbers, running board toolbox, and luggage rack are also added features. The car was last registered in 1953 and was likely a daily work vehicle of a house painter or sign painter. Ronny affectionately named it "Jed Clampitt", because it is somewhat remniscent of the old car driven on the Beverly Hillbillies.

After adding a few replacement parts, fresh oil, gas and water, the old girl started right up! Ronny used the old car in the television series "The Son" and now routinely drives it around his ranch.

This year's T Party was held in Kerrville, Texas. It was chaired and hosted by the Space City T's of Houston. For a firsthand report from our Robert Norberg. Pictures are provided by Joe Pinnelli and John Anderson. Check out the October Newsletter at the bottom of this page.

The annual 4th of July parade, hosted by Joe Pinnelli, came off without a hitch. From all accounts, it was a fun one. And the homemade fried chicken made it worth the drive!

Photos are courtesy of Joe Pinnelli

Another Father's Day car show, hosted the Road Relics is now history. We had a total of twelve members' Model T's and two from the T Fords of Texas club on display. Because our display was so prominent, we had a great number of people visiting and asking questions.

Although a typical warm June day, the temperature was not unbearable like years past. The pop-up canopies provided ample shade for folks and a nice breeze made for a pleasant day. The number of cars on display was estimated at about 200, which made it a much smaller show than previous years.

Photos are courtesy of John Anderson

Jeff and Denise Treadwell really know how to host a mini tour! The weather was fantastic and the hospitality was even better! We had a total of eight Model T's show up but Steve and Cynthia Hadorn's "Tootsie", had a fan belt failure, so couldn't join the line up. Two other T's were slated to show up but had mechanical problems, so we hit the road with seven. Not two miles from the Treadwell's, George Brunner's 1912 Mother-in-Law roadster stopped running. After several minutes of diagnosing by the "experts", it was determined that a malfunctioning coil was the culprit. Since president Norberg lives nearby and just happened to have an extra 6 volt coil, he volunteered to come to the rescue. In no time at all, the roadside repair was made an we hit the road for Jan and Vic Donnell's house.

The rest of the trip went well and we arrived in time to see new club members, Gerry and Shirley Witt's beautiful 1910 Touring car, which Vic had been performing a tune up on. We are looking forward to seeing more of this one! Vic then proceeded to treat us to the fabulous model railroad layout he has been developing in his garage for the last few years. It is truly an amazing sight! It is constructed to resemble the Texas-Pacific rail system of the 1940's, when that company was in it hay-day. The amount of detail and the number of hours Vic has put into this layout is proof of his skill and love of the hobby. We are looking forward to more tours to the Donnell's to see the progress!

We hit the road and arrived back at the Treadwell's without further mechanical issues. Jeff and Denise had prepared a meal of barbecued brisket, ribs and sausage with all the sides. We were served on their backyard deck next to the coy pond. The Treadwell's home is a private and secluded place in the country, ideally suited for entertaining. The food was outstanding! If you missed this tour, try to make the next one! Thank you Jeff, Denise, Vic and Jan!

Once again, George Brunner hosted the tour from his museum to the annual car show and crawfish boil at the Hill Country Care Nursing Center in Dripping Springs. The weather was perfect and the food and fellowship was outstanding. We were joined on the tour by local AACA club, the "Road Relics". There were lots of fantastic cars on display. Check out the April newsletter for further details on this and other upcoming events.

Photos are courtesy of John Anderson and Joe Pinnelli

BAND CHATTER - The Newsletter for the CenTex Tin Lizzies


Click on any monthly newsletter to browse it, then use the back browser arrow to return: